A Ranting and Raving Lunatic

Today I was running late for working in the nursery at church. If I hadn't been so late I wouldn't have been so frantic about finding a spot, but I noticed a space right up in the front. Hurray! This would make it a lot easier for me to carry Addison with my ever-growing belly in to church. I pull closer only to find that there wasn't an extra space. Someone did the thing where they take up two spots, parking their precious vehicle in the middle.

I hate this so much. It just makes me so mad. If any of you guys do this to "protect your car from nicks and scratches" here's what it says to everyone else:

"my car is more important than any of you people."

I guess I wouldn't have an issue with it if they parked way out in the back of the lot, where there are extra spaces, but right in front? At church? One nice touch was the large cross dangling from the rearview mirror.

I know it's dumb to get so worked up over something so small, but it bugs me because our church has a lot of people seeking Christianity and I can't help but wonder if someone was turned off by our church because of this situation. Then again, maybe it was a visitor who did that. Who knows.

I didn't say anything to anyone, didn't leave a mean note on the windshield, didn't slash the tires or kick the bumper, didn't do anything. Just decided to blog about it. 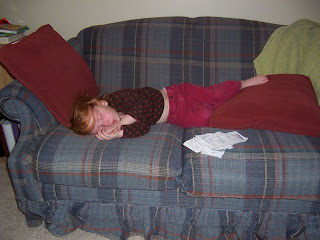 That parking situation really irritates me! I hope a bird drops a big one on that car. Seriously. Our church has special spots for pregnant women... I can't wait!

And the parking thing...those people drive me nuts too!!

Thanks for making me feel better...back on the healthy wagon tomorrow!!