Went to the doctor today. I'm just going to lay it out there: I HATE stepping on the scale. Hate. It. The numbers just keep going up, up, up (duh) and even though I know it's because the baby is getting bigger I still hate it. My old doctor's office would tell me how much weight I had gained between appointments, but this nurse never says anything so I try to keep track in my head. For some reason I thought I was at a certain weight two weeks ago so when the scale said 12 pounds more than that today I flipped out. I started crying as soon as the midwife came in the room. She reassured me that it wasn't that big of a deal, but then got out her computer and started calculating the amounts and stuff. Guess I was wrong. I only gained 3 lbs since last time. I had the numbers mixed up. That is what I get for trying to keep track in my head. I felt pretty stupid actually. I did get to have a sonogram today! That was a fun surprise. My doc couldn't feel the position of the baby and wanted to make sure it wasn't breech (I know I should have said he/she but it's so fun to call the baby an "it". Ha ha ha ha!). It was an old machine, so I couldn't really see much (no anatomy) but it was neat to see all the fingers and toes and a big 'ol head.

I found out that chocolate, peppermint and caffeine cause heartburn. Interesting. I guess chewing peppermint gum (and drinking a mug of hot chocolate everyday) wasn't helping.

So you know how last time I blogged I was feeling a little worried about baby clothes and stuff? Well I went into Baby gap and scored some unreal deals. Got a cute, striped button down shirt that might be perfect for Easter for $1.38, a pair of adorable dinosaur Robeez (these things are usually about $30) for $7.97 and a red onesie for 65 cents! Now that I'm at the point where stuff can be returned pretty easily, I don't mind shelling out some money for gender specific stuff (even though I still feel like I might be jinxing myself a little). Thank you God for my wonderful job!

Speaking of jobs, Devin's company laid off 4 people. Since there are only about 40 or so people that work there, it was a little scary to hear. Ok. Not going to lie. A lot scary. I have always taken his job as an engineer forgranted, thinking that if anything happened it'd be real easy for him to go out and get another job, but that probably wouldn't be the case. He'd be pounding the pavement just like everyone else. We both decided that we weren't going to wait in fear for the other shoe to drop. If he loses his job, it happens. We both trust that God would take care of all our needs. That didn't stop me from joking that maybe he should post a big sign with my due date in his cubicle for his bosses to see, and perhaps a picture or two of a hungry looking Addison with an empty Sesame street bowl in front of her. I'm bad. I know. Devin is a really good employee, so hopefully they will keep that in mind. We'll just take it one day at a time. So don't worry Amanda, I'm doing ok (she thought I would be spazzing right now).

I was so excited about American Idol to start and I haven't even watched it yet! I watched the Biggest Loser instead. This is seriously one of the best seasons I've ever seen of that show, despite the continued endorsements for Extra gum.

Here's a picture of Addison and Celia, going to "Bible Study." Apparently their Bible Study meets under our kitchen table and so far it's just the two of them if anyone is interested in joining. This age is so fun and cute! 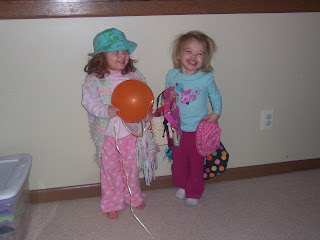 Oh my goodness those two are adorable!!

That is scary about JBA...I hope those 4 people are alright, but I'm so happy you two are good. And I don't blame you wanting to post that stuff in his cube!!

Whenever I start to worry or even think to much about the economy, etc. I just imagine the worst case scenario, and that actually helps me feel BETTER!

Worst case scenario: We are both jobless, we lose our house and the car that isn't paid for, we live with my parents until we get back on our feet.

I even went as far as to ask them if that would be ok if we ever really needed it, and my Mom got really excited and started putting this plan together for us to move in right then instead!

So don't worry, God will take care of you! You won't be homeless, I will drive to Kansas and pick you guys up if I have to!

REALITY CHECK: 156 pounds for a 9 month pregnant woman is awesome Marie!!! You only have 6 weeks to go, and you'll probably lose a pound or two at the end. You're doing great!

Keri: It was the thought that I could have gained 12 pounds in two weeks that freaked me out, but thanks for the reality check. That's what friends are for.

Dang girl - i think I weighed 156 at my 20 week appointment - so jealous!!! Also, I'm addicted to the biggest loser too. I was so sad to see Jerry go home, but I think he and Estella looked awesome!!

Sorry guys I shouldn't have put the exact numbers in the blog (it's edited now). I knew that might make other people feel bad. I know it seems so vain to talk about weight so much, but it's hard for me. I have always struggled with this issue, so when you think you have gained 12 pounds in only two weeks it's even more scary (especially when there's 6 more to go). I'll try not to worry about it so much.

Oh, you had to tell me about Robeez! Of course, I went online and looked and I found the exact pair I want! On sale! (It doesn't beat your price but it's a pretty good deal!) Only problem, it's for a girl. Sigh....6 more weeks!

Marie, I just saw how great you were doing and totally missed the point. I would have freaked out too if I thought I'd gained 12 pounds between appointments.

I also don't think you sounded vain at all. Most people shy away from the whole "weight gain" issue. Even though you know it's supposed to happen and you have a good reason, it still sucks to see the numbers keep going up on the scale! You just never know how much it's going to be, even if you're doing all the "right" things.