I've always wanted to buy stuff on infomercials. I will say that I have never bought one single thing from an infomercial, but I'm always tempted. That steam mop commercial gets me every time. Normally Devin just rolls his eyes or laughs at me, but when he saw the Snuggie commercial he said he wanted one of those too.

You know what I'm talking about? 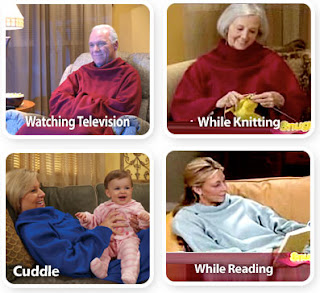 Can't you just see us sitting on the couch next to each other with our Snuggies on? Ha ha ha! Unfortunately Dave Ramsey was making fun of them on his show today. Dave, I agree with you on most things, but what's not to like about a Snuggie? They're awesome. At least they look awesome on tv.

I had a very frustrating coupon day. First I forgot to use two of my 75 cents off coupons at CVS today. I hate it when that happens. It drives me insane.

Then I got all crazy excited over this detergent deal over at Walgreens. I bought two things of laundry detergent for $1 each. They're normally $6.99, so I was ecstatic. Yes I get excited about things like laundry detergent. I'm weird.

I paid for them, happily walked back to my car and then it occurred to me that I have a front loading washer. I have to use "special" detergent. I guess regular detergent foams up too much and can ruin your clothes and the washing machine. DANG!

So yes, I went back and returned the detergent. What can I say, except I have no pride anymore. I needed that stupid $2 and didn't want to waste it on something that I couldn't use (plus I honestly thought it might be nice to put it back on the shelf for someone who could legitimately use it). I hate it when I end up wasting time like that because I'm not paying attention.

Oh, and one more thing. I totally have pregnancy fat face. It has returned with an awful vengeance. I'd be more upset, except I just found out that one of my close friends has MS. Pregnancy fat face is pretty low on the list of bad things to happen to a person. In fact, it shouldn't belong on a list at all.

I will admit that I totally stole this off of someone else's blog, but I thought it was really cool:

i'll cry with you about pregnancy fat face - it does stink! :) I love you friend.