I was look forward to Devin's office parties every year. They always have great food, you can wear jeans, everyone is super nice and it's always fun to see how each floor decorates for the Christmas Floor Decorating Contest each year. This year Devin's floor won hands down. His gingerbread Wal-Mart was the big hit. He spent over 6 hours working on it last night (but was happy as a clam the whole time). We decided to bring Addison to the party this year. She was pretty good, except refused to eat any of the food (even though it was manicotti, something she'd normally like) but still wanted sips of my diet A&W and a cookie. Normally I would refuse to let her have a cookie unless she ate something else first, but who wants to ruin a perfectly good party with a tantrum over manicotti? So she had that cookie, then a few minutes later Linda (the HR lady) gave her another frosted cookie. Then we went upstairs, where Addison had fun playing with this fisher price tool set that someone had included as part of the decoration upstairs until it was time to go. We said goodbye to Devin (he stayed to play poker) but Addison threw herself on the floor in a heap when it was time to go (right in front of Linda's office) and she came out and said "Does someone need some M&Ms?" I wanted to say "Oh dear Lord no more sweets!", but no one likes those moms. So Addison got a cup full of m&ms on top of the cookies and pop she already had.

Addison gave me another indicator that she has no interest in potty training as of yet. I was upstairs using the bathroom and I heard her say "I need to go potty too!" I got so excited, so I immediately came downstairs to where she was playing with stickers and said "Want me to go get your potty Addison?" She said "No thanks. I already went." and continued playing.

Here are some pictures from Devin's floor at work: Their theme was "Santa's Workshop: Building Wal-Marts for good little boys and girls." 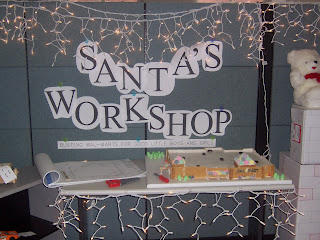 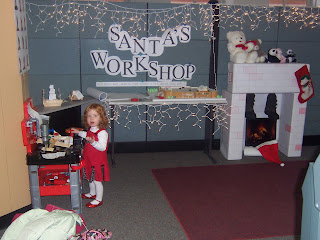 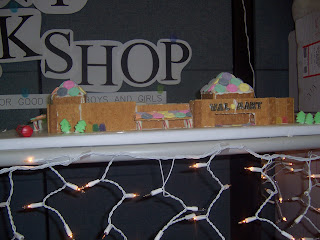 I'm the same way. I would have given her the cookie too. And, hey, at least she was polite when she rejected the potty. Keep trying!

Calvin had cake for Thanksgiving dinner...it was his first time saying cake, so how could we not?

Devin's decorations are awesome!! I'm actually super excited that my pasta was a part of it, I feel like I helped!!