For the past few days Addison has been calling her doll "Princess Tina" and I had no idea where she got that name from. She doesn't know anyone named Tina! Again today she was dancing around in a tutu saying "I'm Princess Tina! I'm Princess Tina!" Then I realized she was trying to say ballerina! I don't think I'll ever forget this one (but I blogged about it just in case I do)! 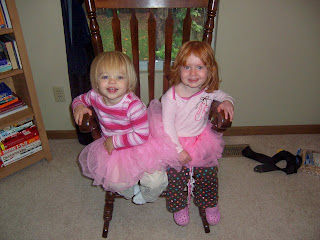 Thanks for the compliments & encouragement! :)

That is so cute! I hope she enjoys being 'princess tina' for a long time!

This is such a precious little story!! I told my mom, she agrees!