This is for Leigh Ayn: It was from "Yellow Day" when I worked at Wamego Middle School. This beauty was a one of a kind find from Grand 'Ol Trunk, Manhattan's best thrift store. 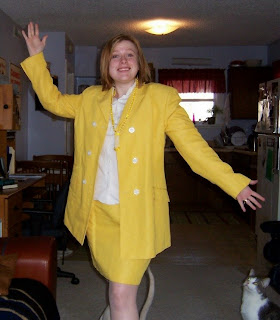 If anyone thinks humans are inherently good, they are welcome to come spend the day with Addison and Celia and me. I love these little rugrats to death, but if anyone was born a sinner it's a two year old. They don't have to be taught to say "NO! IT'S MINE!" or grab something from someone else because they just felt like having it. They also don't have to be taught to make their bodies go limp and throw themselves in a raging heap on the floor if they don't get a glass of milk THAT SECOND. They also don't have to be taught to go into a screaming fit over who gets to sit on my lap while I'm on the computer (nobody). No, all of that stuff comes pretty naturally. I'm only writing about this because Addison's only been awake for less than two hours and Celia's only been here for one hour and already all of that stuff has happened. Well, except for the milk thing, but I'm sure it will. It usually does.

I'll tell you what is inherently good though! Bananas! The year I got married I put on a bunch of weight (blame it on birth control, eating like my husband, stress, bla bla bla) but I managed to lose it all on the South Beach diet. I followed that diet again when I couldn't get those last Addison pounds off of me. Overall it's as very healthy way to lose weight. Pro whole grain, low sugar, etc. but it's really hard to stick to for long periods of time. The one fruit that is "limited" is bananas. I guess they're higher in sugar or something. I wasn't a huge fan anyway, so I just quit eating them altogether. Devin likes to eat sliced bananas on peanut butter toast (isn't that cute?) so I decided to try that today. DANG! It was good! I've been missing out! I'm pretty picky about bananas. If they have even a hint of brown on them I will not eat one (unless it is baked in something). I like mine mostly greenish. I think I'm going to have to eat bananas more often.

Now if you'll excuse me, I hear some weird scraping sound in the room that Addison and Celia are currently playing in....

NOTE:
I really do like toddlers. Please don't let this post scare you into never having children, for fear of the toddler years. Yes they can be little hellions, but they are also hysterically funny. They make you want to scream and laugh out loud mostly in equal parts, so it all evens out.

Bananas and Peanut Butter are my "trigger food" If I eat them, next thing you know I am just dipping them right in the jar and chowing down while I make reservations at P.F. Changs with the other hand!

oh my, i love this post. soooo fun to read!

i'd love a little peek into a day with those two little girls. i'm sure it's always eventful!

Sounds like I have a lot to look forward too with Emelyn! Ha! I'm sure she'll be a toddler before I know it. :)

Oh and thanks for the Yellow Suit!!

Hey remember when I at like 10 bananas at spring canyon?

Won't it be fun when Addison and Celia start cutting each other's hair next week? Hehehehe.

Reasons why we are the same person:
A. I too gained a LOT of weight our first year of marriage.
B. I too blame it on birth control, eating like my husband, and stress bla bla bla.
C. I too am on the South Beach to get myself under control...and it's working quite well!
D. I too prefer some green in my bananas! Always have, always will! :)

Oh, this is Carrie Dahmer...I had no idea that I have a blog called "Portraits by Carrie". It just automatically popped up when I signed in with my google info. Good to know! Guess I should get to posting!

is it just me or do green bananas have an odd taste to them? yeah, i thought so...i prefer mine firm...just like my abs. lol.