Do any of you get depressed when the holiday weekend is over? I always get really sad when Christmas ends (no more music, decorations, gift giving, etc.) but today I was kind of in a funk because Thanksgiving was over. I loved getting to spend all that time with Devin and my family, especially my brother who lives in Denver. He's very attractive by the way for any of you single ladies out there. Plus you get me as a sister-in-law which, in my opinion, is the ultimate prize. ;) I think I may have overheard him teaching Addison about evolution when he was playing with Play-doh with her....

My pie making venture turned out pretty great, but the Pumpkin Pie Cake was (and always is) the hit of the dessert menu. It looks like a pumpkiny blob in a 9x13 pan, but tastes like manna from heaven (or realistically probably a lot better). So thank you once again, Amanda for that wonderful recipe.

The rest of the weekend was spent working and hanging out. On Sunday Devin, Addison and I spent the entire day together which was great. We went to spin class (yep I made it through the whole class, taking it pretty easy of course) First Watch (you can get a free entree if you sign up for their email club) for breakfast, watched Love Actually, and went to church.

This pregnancy I've done much better about my hormonal outbursts, but I had two this weekend:

One thanksgiving evening because my dad was teasing me relentlessly about having ONE glass of wine with my dinner. I made it perfectly clear beforehand that my wine quota included Christmas and Thanksgiving. First he refused to put a glass next to my plate. Then he only filled it about 1 cm with wine. In my family teasing = affection, but he should know better than to mess with a overly emotional pregnant woman. I started crying, which wouldn't have been a big deal, but my mom invited a friend that I had never met before. I did drink my glass. I almost didn't out of stubbornness and frustration, but I wasn't going to miss out on that glass of Seven Daughters white wine at $17 a bottle. I better have Devin warn his family ahead of time that if anyone messes with me at Christmas dinner for having one glass of wine I will probably cry then too.

I had another one at CVS. I had a wallet filled with extra bucks, but I didn't get my totals right and a line was forming behind me so I was irritated that I had to pay out of pocket. I spazzed out on Addison, Devin and the CVS guy. I felt so bad later that I apologized to Addison, Devin and called CVS to apologize to them too. Hopefully I can show my face in there again.

It's getting to the point where I'm getting lots and lots of comments and critiques from people about my pregnancy. I had forgotten about that part. Everyone means well, but sometimes enough is enough. I've had people bluntly ask me "So how much weight have you gained?" Is it ever ok to say that? This man at work tonight who was in his mid 60's looked me over once and said "yeah, you'll go early." Ok.... He must have had his special labor predicting glasses on or something. Maybe I should invest in a pair of those. I really don't mind getting advice and stuff, especially from friends and family (I'll need lots of advice about having TWO kids and not just one), but sometimes it'd be nice just to blend in with everyone else. I am sure you all have had your share of weirdo comments. One blogger I read a while back had everyone post their most hurtful/weird infertility or miscarriage comments and I couldn't believe some of the stuff I read. So I know it's not just me going through this! I'm sure I've dished out some of that stuff too.

Let's end this post on a positive note! I listened to my first Christmas music of the season tonight! I played Drummer Boy by Josh Groban three times on the way to work. Leave it to Josh to turn one of the dumbest songs of the season into a musical masterpiece. 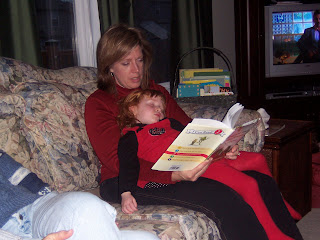 Addison didn't even eat any turkey, but she was still pretty exhausted from the day.


Here's the first of many "getting into mom's makeup" pictures. This time it was the mascara. She'll learn someday that eyebrows and eyelashes aren't the same thing. 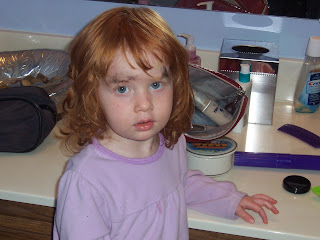 I am so glad you had an eventful holiday and a great relaxing sunday. I took that spinning class on Sunday too! Obviously at a different gym...but its kind of like we were working out together :)

Marie! Gracious! I love this post. I loved that you called CVS to apologize. Every other time I go to CVS I get flustered (especially if I'm doing multiple transactions) and forget to hand over coupons or mis-calculate something.

The picture of Addison with mascara on her eyebrows is absolutely priceless. It belongs in her wedding slideshow some day!