Words I thought I'd never say: I love my van

I know everyone who owns a van says that. It's a running joke amongst all young families. Our family had a gray Dodge Caravan circa 1992 that had no ac and pop out windows that pinched your fingers when you popped them closed. We drove all over Europe in that thing. My parents also hated it due to the 5 transmissions that had to be replaced in the car. It was a happy moment in the Teetsel family when we donated it to missions and bought a Ford Taurus (????) instead. We never bought another van and I railed against vans all throughout high school, college, and after college. I'll never forget going to Spring Canyon after I had been out of college for a year and a gal I was working with just got a new Sienna for her family. She was so excited and I just didn't understand what could be so exciting about a minivan......

Fast forward a bunch of years. I really like our Camry, but now that we have all these dang kids, it has become quite the pain in the rear to pack up and go...anywhere. Addison has to get in first to the middle seat, I put Ian's carseat on the ground and go over to Ainsley's side, strap her in, come back around to Addison who is still whining and complaining that she can't get to her buckle, buckle her, stick Ian in, and then go back around to my side of the car. I inevitably leave a door open and have to go back and close it. Yeah. ANYWHERE WE GO!!! Then there's the proximity of the kids in the backseat, but I'm sure you can imagine how annoying that was. With Devin's car on the fritz, we decided to start a "van fund" asap!

I had been scoping out craigslist for several months looking for a Toyota Sienna or a Honda Odyssey that had less than 100k miles and was in our price range (under $10k) and just wasn't finding anything. I live in Johnson County. We like our vans here. So when I was perusing craigslist and found a really well maintained 2004 Odyssey with 79,000 just slightly out of price range I got really excited. Then I talked the owner down to our price range and got really, really excited. Then I remembered that our price range was dependant on Devin selling his car and my excitement dwindled. Then I thought "well maybe we could just borrow some money--it's only $2 or 3k, which is what Devin will get for his car, it'll be ok." Even if Devin didn't sell his car we knew we could pay back the loan in a couple of months.

We were all set to go ahead and borrow the money to get the van, but we just had a bad feeling about it. It wasn't a huge bad feeling--just a small bad feeling deep down inside. I kept trying to drown it out by using logic. The truth is we had been looking a long time and hadn't found anything like this car. I knew a dealer was going to buy the van and sell it for $3,000 more if we didn't buy it. It also wasn't like we had just decided to buy a car out of the blue one day. It was exactly what I had been looking for. The more I thought about the van, the more I knew it just wasn't a good idea to borrow the money. We had just paid off $62,000 in December and we were really looking forward to the feeling of paying cash for a car for the first time ever in our lives. I honestly felt like God was telling me "just wait, just wait. Trust me, I'll provide for you." I just had no peace about going forward with the loan and I am blessed to have a husband who listens to his wife's "gut feelings". He said we could wait.

It sounds so ridiculous, but I threw a big fat hissy fit. I was really bummed out about having to shove those kids in the Camry for who knows how many more months. The truth is--I felt a lot better deep inside and had peace.

I emailed the seller and basically just laid it out to her: that we had most of the money and just needed to sell Devin's car and that we didn't feel right about borrowing money. I told her we were really disappointed and that I was really mad at Dave Ramsey at the moment. :) I honestly felt kind of stupid telling her all those details, but hey, it was the truth!

I got an email from her later that evening. This is what it said:
I have been listening to Dave Ramsey for years and I would really like for your beautiful family to have this van.  If you really want it, we can wait for you to do it the right way.  Like I told you, I don't want to sell it to a dealer and we are not in a hurry.  If you still want to get it checked tomorrow by a mechanic, and then wait till your other car sells, we are ok with that.  Just your word that you will let us know if you change your mind is all we need.  I can take it off of craigslist and give you time to get yours sold.  This is has been a wonderful vehicle for our family and it would make me feel really good to know that it is going to be appreciated by a family who needs it as much as we did when we bought it.  Talk it over and let me know what you decide.

Hurray!! Yay God!! Yay Dave Ramsey!!We put Devin's car on craigslist that night and would you believe it sold two days later? Yep. A guy was driving through Kansas from Illinois on his way to Denver and wanted a 4Runner. He grilled Devin about the car over the phone and paid him $2300 in cash at 10:30 at night. This was especially exciting because if you haven't seen Devin's car, it's...special.

We picked up the van the next evening and have been happily driving it these last couple weeks. The only thing missing is the family members stickers for the back window. Here is a corny picture of "the trading of the vans" from their family to ours. 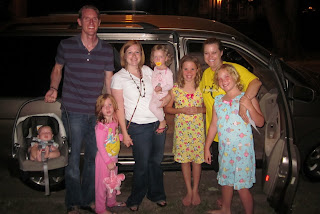 Thanks for reading our story. It is definitely a memorable one for our little family.

Awww! What a neat story, Marie! God has his eye on you and your beautiful family!

Glad you posted, I've been missing your blog. :)

Maybe it's because my family never had a van growing up that I never developed a dislike for them. Not sure. I was so happy when we got ours! I agree with Brenda. Sounds like God was watching over the whole situation. Glad you got your van!

I'm also glad you blogged again! I've been missing it!

That really is such an awesome story! I love how God cares about all the "little" things and I'm glad you have a more convenient life now!

What a great story of God's faithfulness and you paying attention to His still small voice! Thanks for sharing!

What a great story Marie! We are going to be needing a van soon so I appreciate this story as it reminds me to focus on what is important. This will be our first time as well paying cash for a vehicle... so exciting!

it's just the best story ever and i never tire of retelling it to anyone who will listen. yeah god and yeah to you guys, too!
...oh...and of course yeah to my financial bff dave. email your story to him!!

What a great family you got the van from! I know you will love it and put it to good use!! So happy things have worked out. You give me hope that one day soon Lance and I will live debt free and be able to pay only cash for everything!!