Things I never imagined I'd be saying:

And she does it all with that precious, toothy grin. And yes, she's only 11 months old. I'm in some serious trouble!

Some more Ainsley facts:
-She likes pretty much all foods except for cantaloupe, but strawberries, blueberries, canned green beans, and acorn squash are her favorite. Oh, and Ritz Crackers.
-She loves hardboiled and fried eggs, but won't touch them scrambled.
-When she's about to do something bad (usually involving the stairs, trash, or cat food bowls) she takes one step or sticks one hand in, and stares at you for a reaction before proceeding.
-She already knows how to get a nice shriek out of Addison by giving that red hair a nice hard tug.
-She loves to wave and say hi. She also says "Da-Da!" when she sees Devin come in the room. It's pretty cute stuff.

Addison aka "The Sponge" has to know...everything.

One nice thing about having such an observant child is that she notices everything about Ainsley too, which helps when I am not so observant, like when Ainsley found my gum this morning. Truthfully Addison has had a very joyful spirit lately. Last night I made Amanda's Italian Sausage Bow-Ties and Addison said "That was a yummy dinner Mommy! Thanks for making it!!" after eating every single bite. After months and months of "I don't like that." and "I don't like this dinner." and "This dinner doesn't taste good" her little compliment made my day.

Here's a picture my friend Brenda took of us a month or so ago: 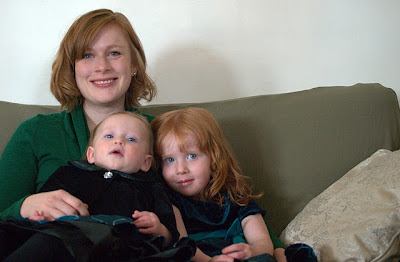 I'm so grateful the temps have climbed back up a bit. As much as I love Kansas, our weather is just the worst. 6 degrees. Ridiculous. Amanda and John drove up from Georgia last week and we had such a wonderful time together. We took one afternoon to visit Heather over at Children's Mercy. When we checked in they printed off a photo badge for Amanda but a regular one for me. I whispered obnoxiously "it's because you're Amish!" Some things never change, and Amanda is a good sport to let me embarrass her...still. Anyway, one visit a year is just not enough.

Oh boy! You have many exciting years ahead with Ainsley! Think she'll have her first trip to the ER by the time she's 2, like Brad did??

The badge thing was a little weird but, you know, us Amish can be pretty sketchy. :)

And I agree! Once a year isn't enough!